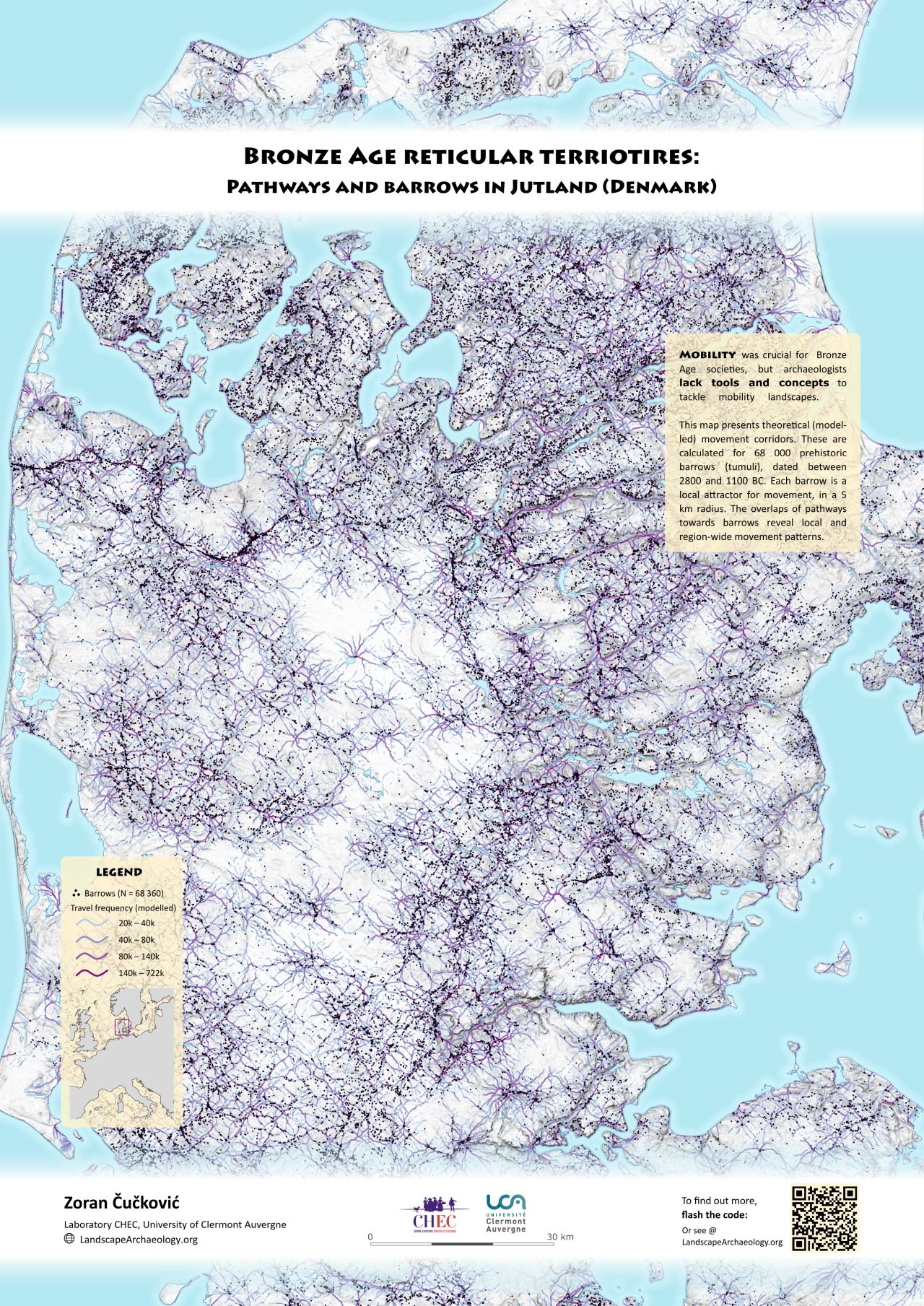 Thousands of prehistoric barrows or tumuli can still be found across the European continent. Built to commemorate the deceased, barrows are particularly numerous in regions where modern agriculture had lower impact, such as traditionally pastoral expanses of the Jutland peninsula (Denmark). In the chosen study area, covering approx. 2/3 of the peninsula, some 68 000 barrows were recorded (Danish ministry of culture 2021). Their construction took place during two distinct periods, the Single Grave horizon (2800 – 2300 BC) and the Early Bronze Age (1700 – 1100 BC ; Holst et al. 2013). Quite early on, archaeologists noticed long alignments of barrows and proposed their association with presumed prehistoric pathways (Fig. 1). 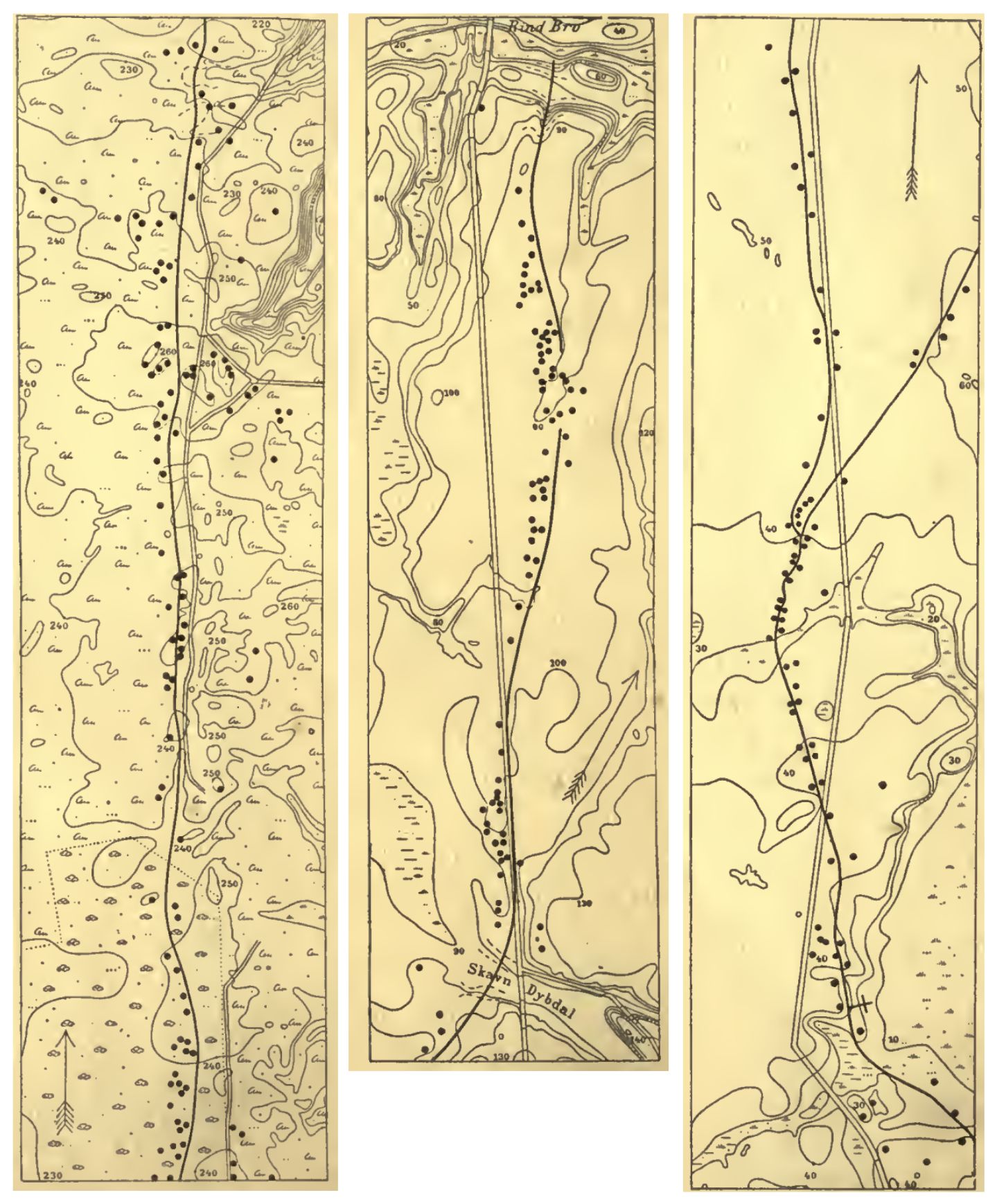 More recently, a number of authors returned to this problem and proposed models of regional communication networks (Johansen et al. 2001) and transhumance paths (Holst & Rasmussen 2013). The visual and cognitive impact of barrows on prehistoric travellers has also been considered; at places, walking across barrow landscapes must have felt like walking besides ancestors (Løvschal 2013). 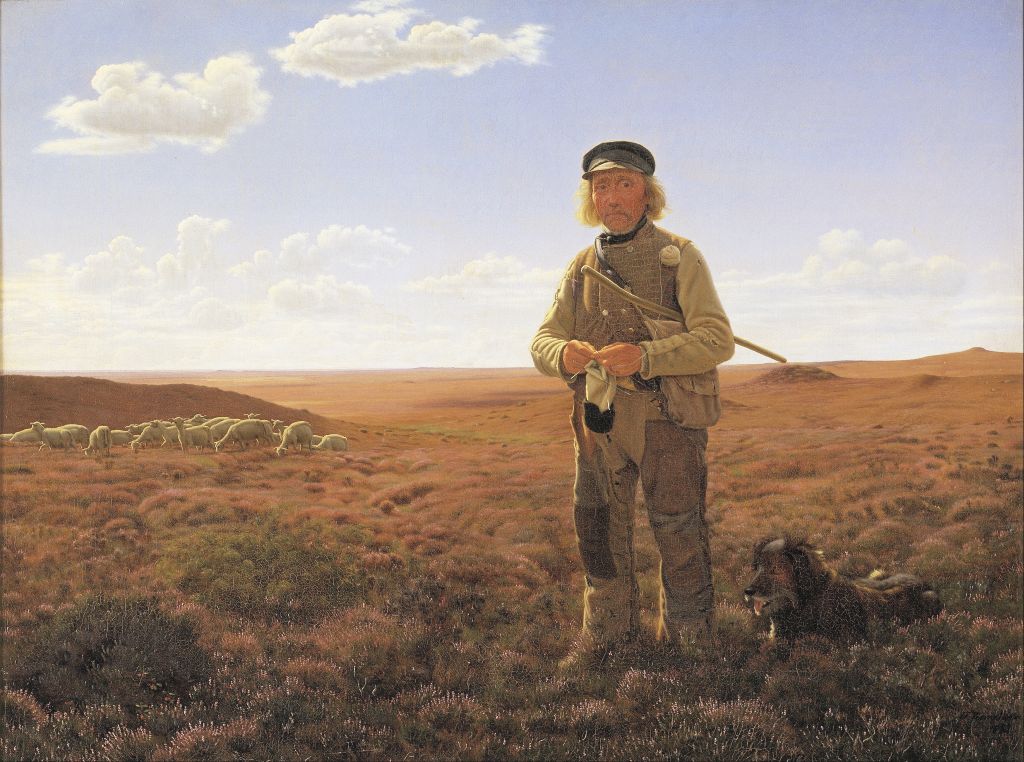 Figure 2. Open, heathland landscapes that cover large expanses of Jutland are best suited for extensive grazing. Note a group of barrows behind the shepherd (painting by Johan Vermehren, 1855).

However, very little has been done by archaeologists to model and to analyse such mobility landscapes. Rather than simply connecting the dots on a map and attempting to reconstruct the course ancient pathways, we need to assess the mobility space, i.e. the social and physical medium which enabled such mobility. Some societies move more than others, and their mobility may be expressed in a variety of manners. Pastoral mobility, trading routes, socialisation across distance, war and conflict: such diversity of practices may result in radically different mobility landscapes.

This poster presents an attempt to model mobility on a regional scale, across the Jutland peninsula. Each barrow is considered as a potential attractor of movement, within a 5 km radius. This produces a pattern of “movement drainage” for each of the structures; when mapped over a wider area, this reveals potential movement thoroughfares. However, the aim of the analysis presented here is not to reconstruct the course of prehistoric pathways, at least at this early stage of the project. Rather, the impressive complexity of the modelled movement patterns should substantiate the concept of mobility space and the need for its archaeological assessment. Such mobility space extends beyond pathways to irrigate every corner of the inhabited land. For the geographer Yi-Fu Tuan

“… if we think of space as that which allows movement, then place is pause; each pause in movement makes it possible for location to be transformed into place” (Tuan, 1977, 6).

We thus need to acknowledge the continuity of transformations between spaces and places, movements and pauses. Indeed, barrow landscapes provide archaeologists with a unique insight into the spatial continuum of movement, if we consider their highly dispersed distribution. They also inform us on the role of social memory, namely the buried predecessors whose presence seems to have anchored attachments to specific places.

The mobility model was produced through the calculation of so-called cumulative cost surfaces in a radius of 5 km around each barrow. As we move away from a barrow, the energetic cost of our movement is progressively increasing, i.e. it accumulates with distance; a cost surface will represent such cost across the entire surface contained within the specified radius. The next step is to use these models to simulate plausible movement behaviour. Consciously or not, over time, humans and animals tend to establish paths of lower energetic cost. This is simulated using a water run-off model, considering that theoretically optimal path is running across the easiest terrain, just as the water tends to drain following the steepest slope. Finally, these radial, drainage-like patterns are combined in a single map.

Note that modelling of human mobility behaviour is not a straightforward matter and that many additional parameters may be taken into account. Here, the terrain slope was combined with landscape visibility, i.e. the openness of the landscape for visual control. Such openness is important for navigation, security or surveillance, for instance of a grazing herd (Verhagen & Jeneson 2012; Fovet & Zakšek 2014). Technically, this was obtained through visibility index, also called total viewshed, for distances up to 3 km (Llobera 2003 ; Čučković 2016).

Crucially, the mobility space is not one among various “social spaces”. Mobility renders space practicable for any other purpose, it subtends almost any form of spatial practice. Political power and territorial control are among of these.

From this point of view, it is interesting to compare the Scandinavian Bronze Age landscape with the prehistoric Mediterranean. There, large numbers of sites, such as fortified strongholds and funerary barrows, tend to gather in places that overlook the sea and in particular sea routes. Such patterns have been noted for the Balearic archipelago (Calvo et al. 2011), the Adriatic coast (Čučković 2017), and the Aegean (Tartaron 2013). 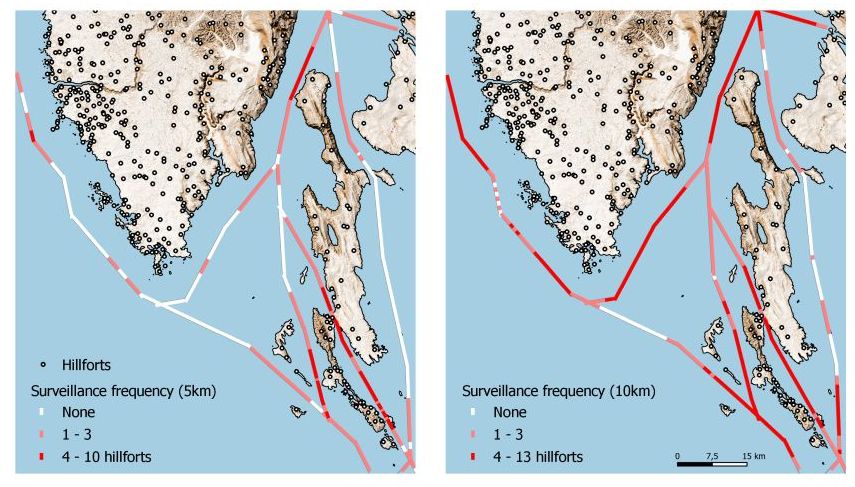 But how exactly are we to conceptualise such controlled and coveted sea? If anything, the maritime mobility space cannot be envisaged as a mosaic composed of a myriad of local territories. The sea in itself offers few assets that would require such territorialisation (fishing zones?); economic and political opportunities are rather brought by the inherent connectivity of the maritime space. Therefore, the territorialisation of the sea should be seen as a mobility politics, i.e. the control, or the attempt to control the flow of people and goods. Such reticular territories are not defined by exclusive boundaries, but rather by privileged connections at various distances. If the common concept of territory is founded upon the notion of space and its containment within a boundary, the concept of reticular territory is founded upon the notion of connectivity and privileges in terms of access to various mobility channels (see also Bonnemaison 1986).

Note that territory is by definition consubstantial with power. Indeed, without being able to act at distance, political power remains only nominal. Mobility of the powerful can be a solution to this problem, as in the case of European medieval kingdoms. The absence of permanent courts and residences for many a medieval ruler prior to the 12th or 13th century is very intriguing, given that none of social, economic and political circumstances seem to have prevented such a development. Rather, a number of rulers, together with the accompanying elite court, deliberately chose to move across the kingdom. This was not a sporadic affair but indeed a life on the move, shifting locations continuously. The data available for the Plantagenet dynasty king John ‘Lackland’ (1099-1216) reveal staggering 2250 journeys during his reign (Gillespie 2017). Mobility was probably a necessity for the exercise of the power, but it was also a mark of royal status. 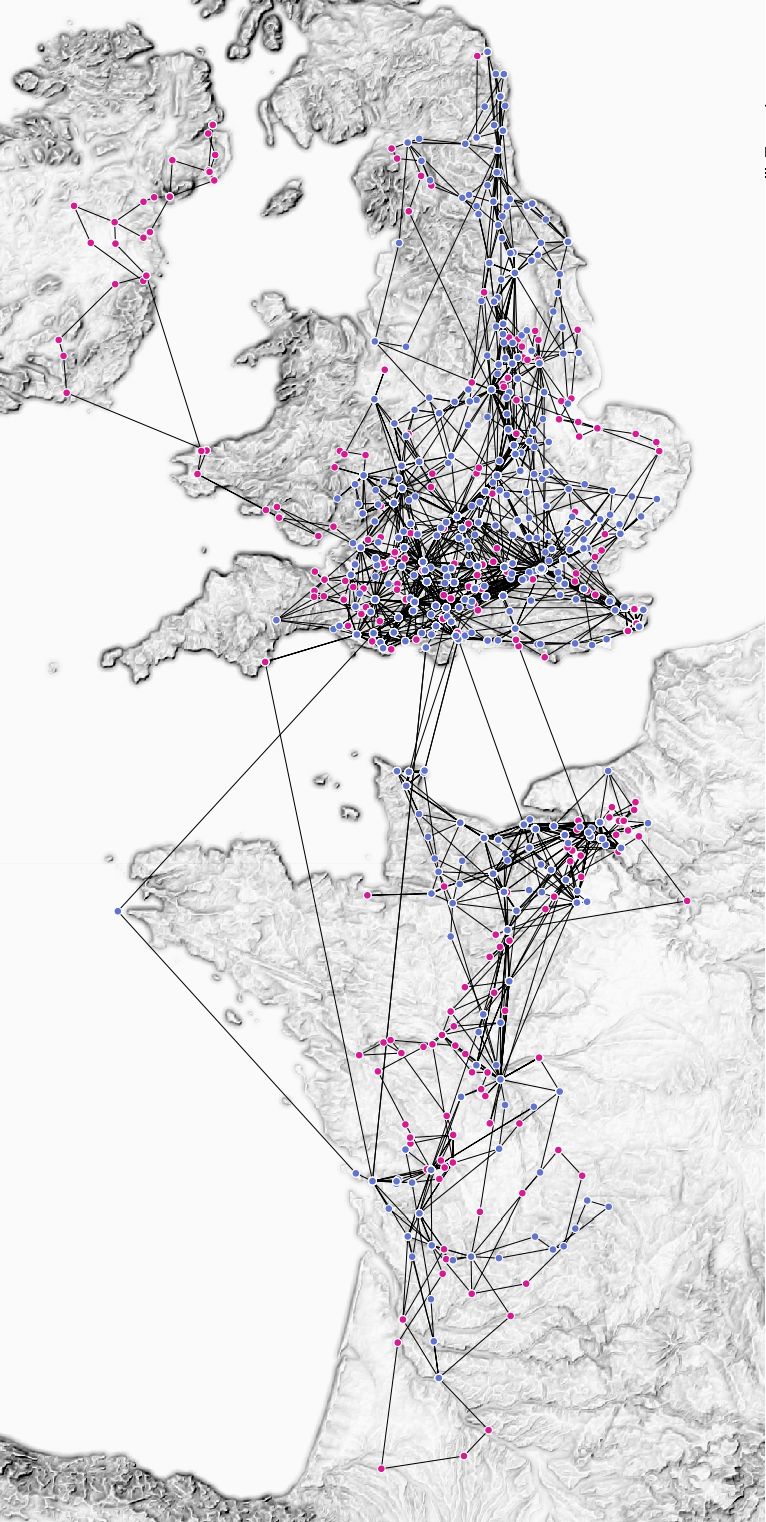 Figure 4. Many a medieval ruler lives on the move. Compare winter (blue) and summer (red) stays of Plantagenet king John ‘Lackland’ (1199 to 1216). His mobility does not show patterns of summer military campaigns, nor of a control from a specific royal stronghold (data from Gillespie 2017).

This poster presents, to the author’s knowledge, a unique attempt to computationally model large-scale mobility patterns over the Jutish peninsula in the Bronze Age. However, the exercise does not aim to reconstruct specific pathways nor to pinpoint presumed movement channels. These represent only a fraction of the overall mobility landscape, in particular for cultures where mobility is more related to spatial practice than to specific infrastructure. Animal husbandry and maritime mobility, both highly relevant for the Bronze Age, are practices which may only loosely be related to a specific infrastructure. This poster is thus introducing the concept of mobility space where every location is envisaged as populated with an active, mobile human agent. The map presented here should disclose the immense complexity of such mobility space, which would otherwise be left out as cartographic blanks. There is no such thing as an empty space, but rather an intricate web of effective or potential connections, reaching to every corner of the inhabited land and still awaiting to be tackled for the Bronze Age.

Tuan (1977). Space and Place: The Perspective of Experience. University of Minnesota Press, Minneapolis.

Verhagen, J.W.H.P. and C.F. Jeneson (2012). A Roman Puzzle. Trying to find the Via Belgica with GIS. In A. Chrysanthi, P. Murrieta Flores and C. Papadopoulos (eds.) Thinking Beyond the Tool. Archaeological Computing and the Interpretive Process: 123-130. Oxford: Archaeopress.